The Glaciers are one of the main attractions of Patagonia. 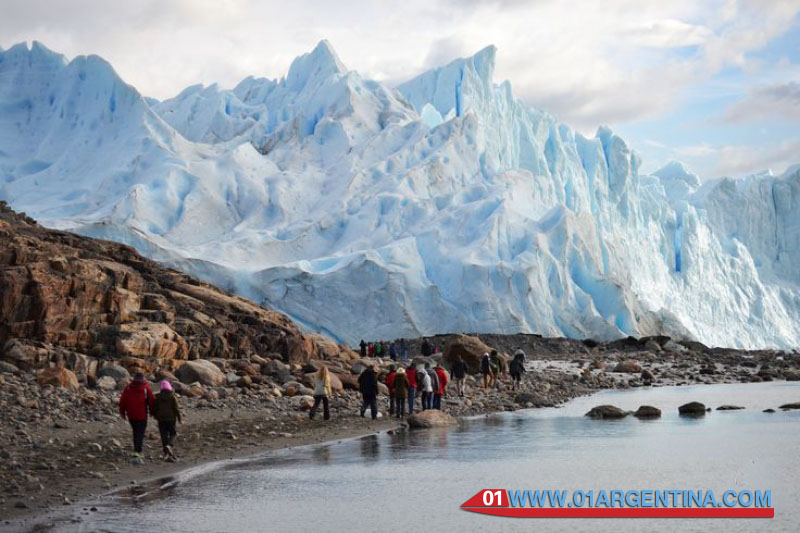 Los Glaciares National Park, to the southwest of the Province of Santa Cruz.

It hosts ice fields that occupy 2,600 km2 (more than 30% of the surface of the Park), advancing on two large mirrors of water, Lake Viedma and Lake Argentino.
Los Glaciares National Park was created in 1937, to preserve an extensive area of ​​continental ice and glaciers.
It extends over 600,000 hectares located in the southwest of the Province of Santa Cruz.

Due to its spectacular beauty, glaciological and geomorphological interest, and part of its endangered fauna, Glaciares National Park in Argentina is one of the most important tourist site in the country, declared UNESCO a World Heritage Site in 1981.

Aspects of its nature
Undoubtedly, the most outstanding feature of this National Park are its ice fields, which in total occupy an approximate area of ​​2,600 km2 (this implies that more than 30% of the surface of the Park is occupied by ice). From these descend 47 major glaciers.
The best known of the glaciers is the Perito Moreno, which expands on the waters of the South Arm of Lake Argentino, with a front of 5 km. and a height, above the level of the lake, of 60 meters.

The Upsala Glacier, located on the North Arm of the same lake, is the largest one; It exhibits a length of 50 km. and a width of almost 10 km.

In the northern sector of the Park is the imposing Fitz Roy massif, which stands out for its height (3,375 meters) and for its monumental aspect with the surroundings of the surrounding cordilleras.

Fauna and Flora of Los Glaciares Park
To the mountains and glaciers is added the attraction of the sub-Antarctic forests dominated by the lenga, the cherry and many bushes such as the notro or ciruelillo and the calafate, which offer colorful and colorful flowers.

The forest has the presence of huemul, which during the winter comes down from the high grasslands in search of shelter and food.

Among the avifauna, the black Patagonian carpenter, the southern parrot, the garnet-crowned hummingbird, the choique and the condor stand out.

In aquatic environments there is a great diversity of birds, including black-necked swans and ducks such as the large diver and the torrents.

To the east, the foothills of the Andes are blurred in the Patagonian plateau and the forest gives way to the steppe. Here live guanacos, gray foxes and Patagonian skunks. Among the birds stands out the great runner of the area, the ñandú petiso.

Weather:
Cold, windy in spring, less wind in autumn. Rainy from March to May.
Moreno, which expands on the waters of the South Arm of Lake Argentino, with a front of 5 km. and a height, above the level of the lake, between 70 and 60 meters. This majestic wall of ice covers an area of ​​230 square kilometers.

The Upsala Glacier, located on the North Arm of the same lake, is the largest one; It exhibits a length of 50 km. and a width of almost 10 km.
In the northern sector of the Park, in front of the Viedma glacier, is the imposing stone massif of Fitz Roy, or Cerro Chaltén (as it was called by the Tehuelches that inhabited the area) that stands out for its height of 3,375 meters and for its monumental aspect with the surrounding Cordilleran cordillera environment.

The area of ​​continental ice and glaciers is a natural treasure, declared a World Heritage Site by UNESCO in 1981.

This formation of millenary ices of a furious white is crossed by shining cracks ensnared between blue and violet. From the depths sounds of rivers submerged in the restless interior of the glacier.
The Perito Moreno Glacier slides at a speed of 100 meters per year, forming a barrier between the Rico Arm and the Canal de los Témpanos of the Argentino Lake, which ends up producing the famous rupture of its walls due to the great pressure that exercises water

Every four years approximately large blocks of ice fall off with a roar similar to thunder of shocking magnitude, generating icebergs that are dispersed in the lakes by the action of wind and water. The pieces of ice can reach large size and raise waves, so you should not leave the observation area.
Due to the changing climatic effects of the last decade, glaciers in general are in an increasingly accelerated extinction, these landslides no longer occur every four years.

On the southern margin of Lake Argentino, the tourist village of El Calafate is the gateway to the glacier. At 80 km from the entrance of the park, this small town of 6000 inhabitants has a variety of accommodation and gastronomy services.