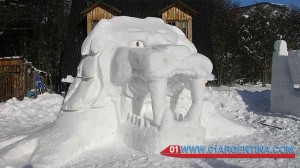 The Snow Sculpture Festival Ushuaia in 2014, to be held from July 30 to August 3, 2014 in Winter Center Haruwen. This is an institutional project of the Ministry of Culture and Education in order to encourage artistic expression, with unparalleled distinction that brings Ushuaia, forest, snow and mountains, allowing participants to develop at every opportunity, his creative work in a single stage in the world frame.

This event was born in 1995 on the initiative of a group of members of the Urunday Foundation, Chaco sculptors with international experience, who transmitted the techniques of carving snow. Then he had the support year after year by the Association of Arts’ Forms of Fire. ” The organizing authority is the Department of Culture and Education of the City of Ushuaia.

In 2013 included 63 sculptors in this new edition of an impressive show of sculptures of snow, which they took place in the famous “enchanted forest” Haruwen of the ski resort, 30 km from the center of the city of Ushuaia. The 17 artists shaped ice blocks, two of them were out of competition.

Among those who stood out were a call “Malvinas”, which could be seen a soldier in a block and a dove of peace in another. This was done by Lara Galetti, Thomas Suarez, Nare Trujillo, Enrique Maria Ramos, Anabel Gomelsky Orellana and Sofia, all the Multipurpose Center Art fueguina capital.

Meanwhile, at the other end of the facility could be observed in four blocks, the “train of prisoners” in great detail. One of the blocks belonging to the locomotive, the other a wagon where the wood was, the third block was transporting the inmates and the jailer in the room watching and a wagon with several windows. The work was completed with an artistic presentation that included the artists themselves characterized as prisoners, with the typical striped clothing. It worked Viviana Oliva, José María Martín, Monica Lemus, Patricia Alonso, Claudia Miani, Santiago Pastorino, among others.
Outstanding works in the Sculpture Festival Ushuaia
Also, note the play called “Self-sufficiency”, a critique of the reality on the fuel. You could see the hose which went a little men last drop and below, along with a person waiting with a can in his hand. It was made by Rodrigo Crespo, Vanessa Rivero and Juan Ramos.

“Scrat” is the squirrel from the movie ice age and also attended Haruwen, thanks to the work of the sculptors of Chaco and the Rio Grande.

Meanwhile, “midnight sun at one of the afternoon,” by sculptors from Canada could be seen from the front and back.

This festival was born in Tierra del Fuego by a group of sculptors who came from Chaco and enthusiasm grew Association art “forms of fire” which constitutes Ushuaia. In 2002, gives this city the title of “capital of the snow sculptures”, one of the most important attractions of the winter season.
The coordinator of this party is a renowned sculptor Haruwen Ushuaia called Antonino Pliello and prizes are awarded according to various polls on the last day.