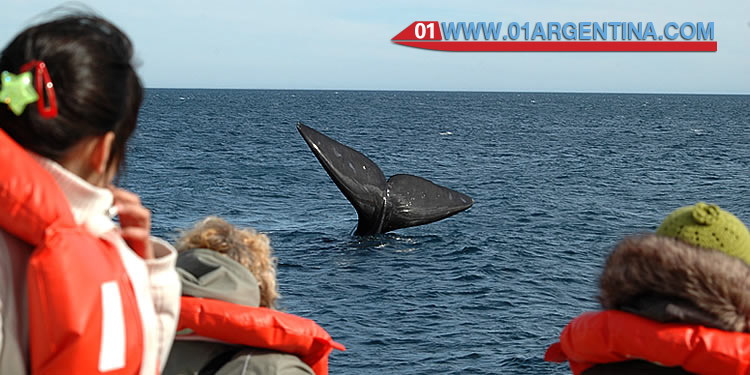 Detailed information on whales in Patagonia

From the first days of May to the beginning of November, hundreds of free whales come to mate and breed, some with their young, from different parts of the cold southern seas. Hence its name Eubalaena Australis, whose morphology is recognized with the naked eye by those who make the sightings.

With a dark body, blackish and blackish, plump and with no dorsal fin, the free whale has in its great head certain callosities that allow to differentiate from each other and that in turn are a kind of distinctive icon of this type of cetaceans.

Cities like Puerto Madryn, Puerto Pirámides and Trelew are visited by tourists from all over the world, who are eager to see the famous whales from the coast as well as from some of the boats that offer the service of sightings. September and October are the months of higher concentration of these mammals.
With almost 40 years of history, sightings began in the 70’s, when some ships sailing the peninsula noticed that the whales came curious and when perceiving the presence of the man, did not escape, but showed their tails, Jumping and even swimming in circles around the boats.
Today the situation is identical, but the passage of time, the emergence and institutionalization of the sightings, the scientific contribution to correctly read the behaviors and habits of the species and, above all, the constant presence of these ocean goddesses made the Southern right whale will become an Argentine and Patagonian passion.
Glues, jumps, spines, jets of water. Everything is ready for the sighting to begin. We invite you to be part of this unique experience, where passion always wins the game.
Detailed information on whales in Patagonia.

Seeing the southern right whale from a boat is a unique experience, which must be done at least once in a lifetime. Their jumps and bursts in the water, their tails and their movements teach us daily habits and customs.
It is necessary to arrive well sheltered and, if possible, with windbreaks to Puerto Pirámide. From there, already in the first days of May begin the sightings at 10, 12, 14 and 16 hours, approximately.
From Puerto Madryn, we take provincial route Nº 2 towards the isthmus Carlos Ameghino, the only link between the peninsula and the mainland. From this well-known geographical point you can see the two gulfs that guard it: the Gulf of San José, to the north, and the New Gulf to the south, towards which we were heading.

After accessing the Wildlife Reserve, the feeling of being very soon in the vastness of Península Valdés began to gain ground among those present.
The wind and the smell of the sea confirmed that in a matter of minutes we would be in Puerto Pirámides, the only urban enclave of the whole peninsula, from where the expeditions to make the famous Patagonian whale watch go out. From Puerto Madryn were almost 100 kilometers traveled.
Thousands of visitors from around the world gather between May and November to observe one of the most majestic spectacles that nature possesses: the whale watching of the southern right whale.
They come with their cameras and camcorders, eager to get close to the giant cetaceans and get “the picture” of the jump or its huge raised tails.
And there we were, with waterproof coats and life jackets. Before the launch was introduced into the water, each of the people present was mimicked by the landscape offered by the sightings. Very slowly, the boat became part of the deep and salty waters of the sea.
We did not take long to observe the first whale that approached us, curious but audacious.
To our surprise, a colossal dark mole emerged sharply to the surface of the water to fall again with an unbelievable rumble. He was showing us all his greatness.
While we watched the show, the guide told us some of the most important characteristics of these great cetaceans. The way they move the body, the movements of their tails, how they swim, what the jet of water really is that as spray comes up, everything.
“The southern right whale has a curved body and does not have a dorsal fin. Adult females measure between 13 and 16 meters, while males reach only 12. Adults can weigh between 30 and 40 tons,” explained the guide .
“In the mouth, which has a curved shape, are attached, together with the upper jaw, some 260 plaques or horny beards, originally called whale, whence comes the name of Castilian whale,” he added. We continue to sail. Suddenly another whale stuck its giant tail over the water, about five meters, and remained with its head down for several minutes, abandoned to the whims of the winds.
We were then fortunate to observe a mother with her calf. Its gestation lasts twelve months and for an equal period of time the female breastfeeds the newborn, who at the time of delivery is five and a half meters.
When these animals are in breeding capacity, they return, with intervals of three years, to the area of Península Valdés looking for safe and calm waters to give birth to another calf.
In the upper part of the head they have calluses that are their “seal of identification”, like our fingerprints, so to speak. And those who know them or see them usually distinguish them by this characteristic.
We know that behind the calluses are the spiracles, the holes through which the animal breathes and from which it violently expels the air from its lungs. Popularly it is spoken of a “jet of water” that emerges from its loins, but in fact it is air that exhale through these holes, a sort of nasal ventricles.
The type of sightings that are made here is unique since the boats can not approach the motorized whales, they must only reach a point and then wait for the cetaceans to approach.
In order to avoid alterations during breeding and breeding season, only navigation in the Golfo Nuevo and vessels of tourist companies, which must have the proper authorization of the Argentine Naval Prefecture, are allowed. The sighting is totally regulated to protect the integrity of the free whales, declared Natural Monument in the year 1984.
Thousands of anecdotes and curiosities can be told about whales, but it is essential that visitors have their own experience. As we said at the beginning of this text: the observation of the southern right whale from a boat is a unique experience, which must be done at least once in life.