Wildlife and climate of Patagonia 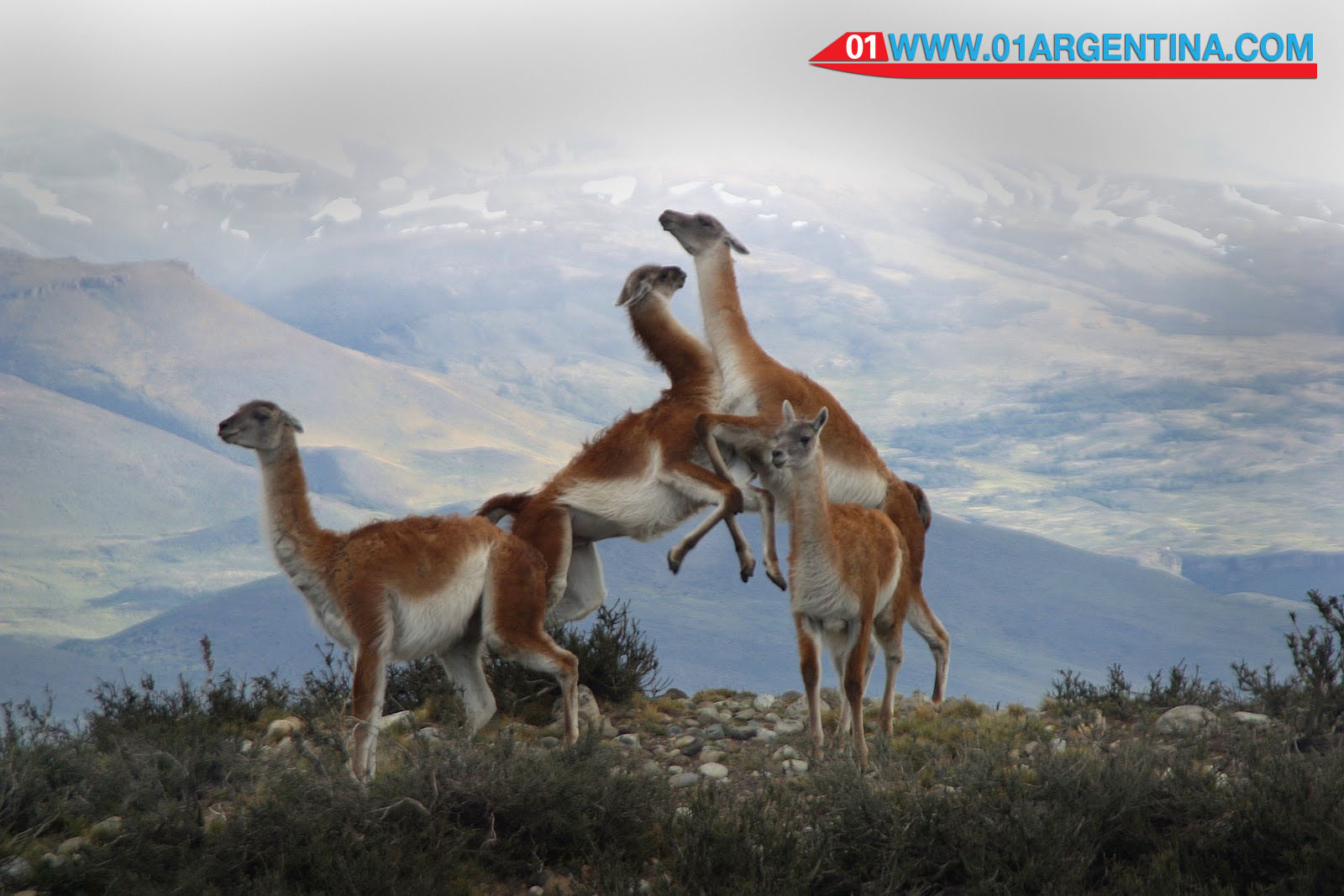 All year long is beautiful visiting Patagonia Argentina  but if you read this article you may find useful information that helps you to decide when to go to Patagonia region.

The main features of the Patagonian climate are short fall and spring, and long winters. High temperature range between summer and winter, and also marked temperature difference between day and night.

The average winter temperature is -2 ° C and maximum summer can reach 40 ° C in the Upper Black River Valley and Neuquén. Fire buries the thermometer reaches 30 degrees.

The Andean Patagonia is humid, rainfall exceeds 2000 mm per year and to the east is increasingly dry to the Atlantic area, where the average annual rainfall is only 200mm.

In order to travel safely and enjoy the Patagonian landscape, the best time is in summer, between December and March, although this excludes, of course, the snow lovers.

To describe even briefly flora of Patagonia, it is necessary to distinguish the different areas within it there.
The northern part of the coast, covering the coastal region of Chubut and Rio Black, is a transition zone between the Chaco forest and the Patagonian steppe. Oddly enough, the mountain vegetation in Argentina, extending from the Chaco in the north, forming a wedge to this area of ​​Patagonia. Here are common grasslands, shrubs and stunted trees.
Entering to the plateau, typical of central Patagonia, the vegetation changes and acquires the features of the steppe. The grasses become more sparse and mountains of jarilla, neneo and coironales, all typical vegetation of an area where the annual rainfall ranging between 200 and 400 mm .. But perhaps the most characteristic of this region is observed desertification progressive caused by human action; it is the result of overgrazing of the fields with sheep and goats, and logging of the largest bushes for firewood. This is one of the most serious problems facing the region, and to recover land desertification is time consuming and involves a complete change in the productive activities of the people that is not always feasible to achieve.
They have also contributed to the impoverishment of the fields volcanic ash that covered a few years ago and whose effects still remain.
The river banks show a completely different, like an oasis in the desert landscape. There, in addition to the red willow or Creole, endemic species abound trees imported species.
As we move towards the ridge you see how the vegetation goes, almost abruptly, the forest steppe. The Andean-Patagonian or sub-Antarctic forests are characterized by the presence of Araucaria or monkey puzzle tree, in the Mapuche language, which can reach 40 meters high, with trunks a meter in diameter, rough bark. This primitive conifer found only in the mountainous area from the Copahue volcano to Lake Lácar. There are also beech, coihues, oaks and ñires. Below these large trees grew calafates scrub undergrowth, chaura and currants.
Within the National Parks sectors virgin flora and wildlife are preserved.

In the Lanin National Park, the most typical tree is the Araucaria.
Inside the Nahuel Huapi National Park you can see, on the way from Laguna Frías and Puerto Blest, a copy of coihue called “El Abuelo” which has more than 500 years, is 40 meters high and two in diameter . There are also numerous cinnamon, the sacred tree of Arauca. Myrtles can be found scattered among other trees or forests form multicolored, like the famous Arrayanal Quetrihue Peninsula, which looks like something out of a fairy tale.
In the Los Alerces National Park are just larches, along with cypress, canned native species. These conifers are developed throughout the Andean strip, within a ceiling of 1000 meters. copies of more than 3000 years old can be found.
All these trees belong to species that are almost extinct today because of the quality of its wood, which does not rot and can be separated into shingles for roofs and walls.
They are also wonderful in this area, and something that strikes the traveler, the number of flowers and fruits, which grow like wild bushes along roadsides and under the forest of large trees, as well as the famous “Llao Llao” fungus that develops in the trunks of coihues.
To the north, steppe landscape with grassland and desert vegetation: Finally, on the island of Tierra del Fuego two distinct zones are distinguished. To the south, a mountain landscape, with beech forests, ñires, coihues and cinnamon, and an understory of shrubs, such as the famous michay and caulker, grasses and ferns. In poorly drained areas or low peat moss there.

Patagonia has a rich wildlife with distinctive features.
The most important is located on the coast and continental sea. There the number of animals and species diversity is striking. Among the larger vertebrates is the southern right whale, seen from the coast, along with the orca, dolphins and large amphibious mammals such as sea lions, elephant seals and fur seals.
Birds deserve a separate chapter, as describing only species found in Bird Island, off Peninsula Valdes it takes several pages. We will mention only the most important, as Magellanic penguins, various species of cormorants, gulls and terns and Antarctic doves, among many others.
Departing from the coasts and entering in the continent, we find that the ancient inhabitants, native animals of the plains, have been displaced by species introduced by man from the conquest and colonization. The original wildlife consisted of the tiger, maned wolf or “large fox”, the pampas deer and peccary, which today have migrated north. The new inhabitants are colored deer and wild boars, in addition to sheep and goats. But they have been kept pumas and guanacos, which are forced to compete with sheep and goats for territory.
The most characteristic, and one can easily see land animals, although their number is reduced to the south, are the foxes, feral cats and skunks, the Patagonian hare or mara (protected endangered species), armadillos called “hairy “or” piches “along with the ostrich and martinetas (like partridges even larger).
In the area of ​​the mountain range, huemul, deer or medium, and the Pudu, or dwarf deer, native and unique species, they are now almost extinct. Red deer, not native to the region are. Imported species such as trout, rainbow trout and salmon are also abundant in the Andean rivers.
The birds from the mainland, in the area of ​​the plateaus are mostly predators and scavengers. Many of them are along the routes, because the remains of hares and other animals run over by motorists eat. Also on the plateau, but especially in its foothills to the coast, there are geese and parrots. The condor is found only in the high peaks of the Andes.
Poisonous species are not many and there are some very rare, like a snake that lives in the northeast, the “big centipede” and a spider, “widow” or red spider poto-shaped black sheep and a red spot behind . Its bite can be deadly. Not so with scorpions, much more common and which only produces stinging bite. Is impressive but completely harmless spider chick, does not matter.
Protected Patagonian Region, what is it and how to conserve
Protected Patagonian Region has zoo and phytosanitary differentiated from the rest of the country status, allowing the marketing of its production to the most demanding international markets.
Patagonia is the only region of the country internationally known as Free Area Fruit Fly. Similarly, a large part of its territory is also internationally recognized as FMD-free area without vaccination, generating significant benefits for all regional farming, one of the economic pillars of the region.
To maintain this status is very important in carrying out checks at the point of access to the region. This task is delegated to the FunBaPa.

One of their main concerns is the control at the time of vehicle access to the Patagonian region, as the greatest risk is generated by the entry of products of plant and animal origin.
Regarding the latter, it is important to mention that the positions of the hardest hit Control usually tourists who, at the time of travel, through ignorance, often carrying prohibited goods.
Here is a rough list of products of plant and animal origin restricted:
Products with restricted and / or prohibited Protected Patagonian Region income are those capable of vehiculizar Foot and Fruit Fly.