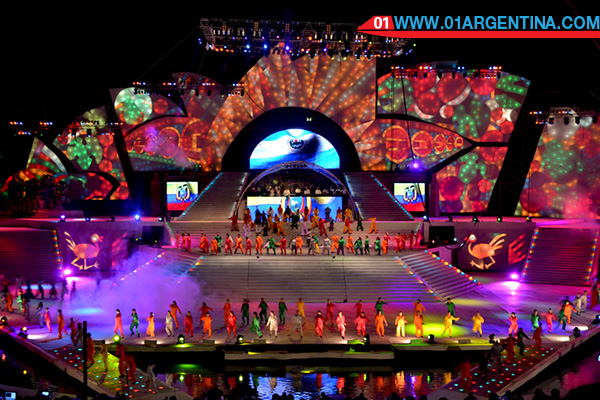 During the month of March takes place in Mendoza one of the most important festivals of Argentina and conveners: The Feast of Vendimia. La celebration is held in honor of its main industry, Mendoza each department organizes fun festivals with leading cultural performances, which are the candidates for national queens.

The National Harvest Festival in Mendoza reflects celebrating the grape into wine through the effort undertaken winemakers in the vineyards enduring inclement weather and various cultural, political and socio-economic over a year factors, as well also specialists working in warehouses and laboratories that contribute to the manufacturing process.

The Central Party has four main events: the “Blessing of the fruits”, the “Milky white queens,” the “Carousel” and “Central Act”, the latter being the most representative and attractive to national and international level 2 held at the Greek Theatre “Frank Romero Day” which is redesigned in structure year after year, in which over a thousand dancers participating in the scenario, as well as local actors, combining art and sound and light shows. Before the central festivities are held a series of secondary holidays (departmental parties) in each of the departments that make dieciochos the Cuyo province during the months of December, January and February where as in the ‘Act central ‘dancers and actors involved but in smaller amounts, and where she was elected queen departmental then compete for the national crown.

Its first celebration was held in 1936, and has since held continuously until 1955 and even in 1956 was not performed due to financial problems and the Liberating Revolution faced by the country. Then he continued in 1957-1958 (in 1959 it was called “The Wine Festival”) and then held again in the year 1960-1984 (due to the earthquake in Mendoza in 1985), and from 1986 to the present without interruption.
In 2011, the National Geographic named the “Harvest Festival” as the second most important festival of the harvest of the world, behind the “Thanksgiving celebrated in the United States. Furthermore, it is considered one of the five most important and popular festivals in the world, next to Carnival in Rio de Janeiro Carnival of Venice, among others.
Health for good wine!

National Harvest Festival 2015 will be held on 07, 08, 09 and 10 March 2015 in the city of Mendoza. It remains to determine the name of the party and the five proposed script for the next edition is presented. The Party which has lasted over 73 years experience and is one of the most anticipated by tourists festivals nationwide.
This year’s proposal contains requirements Gender: script – vintage expressing the cultural heritage of the Province, understanding this as redefining the cultural factors that make the vendimiales celebrations, particularly highlighting water as a natural, vital and essential resource, transformer physiognomy of the Province of deserts oasis. The identity of the Harvest Festival and the Harvest Celebration, and scenic epitome of its Workers
During the party around 1000 dancers and 50 musicians on stage will be presented, which involves hard work that will impact everyone in the party nights. The theater has a capacity for 20,000 people but as happened in other editions in the hills surrounding 40,000 others enjoy the show and attendance exceeding 60,000 spectators.

Vendimial Timeline:
• Sunday 1 March: “Blessing of Fruits”. Ceremony where they thank God healthy fruit harvest obtained. New wine proceeding to “Beat on the plow,” which symbolizes the man who tills the land, under the patronage of Our Lady of Carrodilla and blessing of the new fruit is available.
• Friday March 6: “White Way of Queens”. Lighting parade floats that carry both outgoing queens and aspiring national scepter.
• Saturday March 7: “Carousel Harvest”. Morning parade these carriages, but escorted by gaucho groups in costume, on horseback, standing traditional oxcart.
“Central Act”. Show where folk dances are performed over a thousand dancers on stage, performing arts, lighting and sound. It takes place the election and coronation of Queen vendimial national. It ends with a fireworks show launched from the “Hill of Glory”.
• Sunday 8 Monday 9 and Tuesday 10: “Repeats”. Artistic show of the Central Act but not the choice of the national vintage queen is repeated. Live performances are presented by renowned national and international artists.