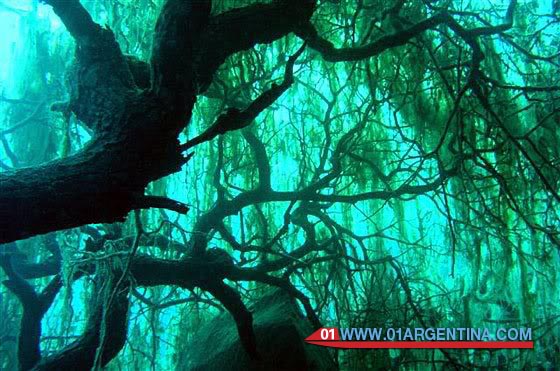 Villa Traful is a tourist village, located in the department Los Lagos, on the south shore of Lake Traful, south of the province of Neuquen in Argentina’s Patagonia. It is 400 km from the city of Neuquen.
It is a large body of forest succumbed to a shift of the land and fell into the lake and has since become a major attraction in the Nahuel Huapi National Park in the Lake district.
Forest comprise an amount of fifty dried cypress scraping the surface of the water, releasing some of their tips to look really adds a special charm to this place. Imagine that delight the eye with glass water, mountains and trees is already a crazy Argentina; when diving come everything is unreal, everything is new, as the first-feeling that is printed on the skin and soul.
Light gray trunks underwater light dyeing. In 1960, during the earthquake that struck the region of Osorno in Chile, part of the slopes of Lake Traful sector he slid into a movement of dislocation dragging reaching the coast of the forest and vegetation. This is why we find trees that descend up to 30 meters deep, from its roots to reach the surface superfi with their glasses. This whole issue is inhospitable dive among trees and dreamlike, see the fish as above the tree crown is imagination made flesh. The trunks have lost their outer clothing and seem petrified. Incredibly, transparency and the stillness of the water allowed us to see them despite the almost fifteen meters deep. They are root ?, why not lie down? The questions never cease to amaze tourists.

A hardly known destination of an invisible eye on earth.

From the port of Villa A 20 minutes ago by water to the north bank and it reaches the precise point where the most interesting part is the forest. Later it comes to natural caves of Lake Traful, in one of them and decked by a wide variety of wild flowers stands the statue of the Virgin Stella Maris (patron saint of fishermen).

It is best to visit on a day with no wind and clear to distinguish, through the clear waters, the amount and height of cypress-dead but his feet, still challenge the uneasy swaying of the lake. This is a classic for diving enthusiasts

Other sites to visit in Villa Traful

A symbol for Villa Traful, is located by the confluence path from just 5 km. Villa, is a glacial rocky cliff 102 meters about falling sheer to the lake.

It has two balconies guardrails for observing quietly throughout the surrounding landscape.

This walk can be started from any point in the Villa crossing the internal streets with the vehicle reaches the Pampa de los Alamos, there all kinds of transport motorcycle, car, bicycle, horse left, etc. And continue walking, everything is well signposted, if you take the left begins to walk a path between a profuse coihue and after walking about 500 m. It is up to the waterfall Aº Coa Co, the jump of about 30 m. approximately. It can be seen falling from the basalt rock mantle.

A gazebo with all facilities to visualize the shape of the lake, bays and mountains. The decline is another path after crossing bridges trunk forests and returns to the starting point.

Reaching the waterfall Arroyo Blanco is also extremely easy and enjoyable, in the parking you take the right hand and goes through a natural tunnel formed by the lush greenery 1 km. and then ascend and descend through the forest you reach the viewpoint of this waterfall, which although slightly smaller his fall is very attractive.

also known as Creek Falls waterfall is located along the route Prov. No. 65 towards the Portezuelo, to the Km. 8 and before crossing the bridge over the Arroyo “Waterfalls”, the vehicle is parked. On the left next to the course of the stream begins the path, the first 300 m. They are easily accessible from profuse forest big coihues, then it becomes more difficult due to the slope, being advised to be careful especially with children and seniors.
After 30 minutes we started the walk at the foot of a large jump of about 25 m. tall, surrounded by a variety of wild flowers and a perfect microclimate. The deafening sound of water transports us to another dimension to fully enjoy the magical nature.

Ideal for younger excursion or those with rising like walking the slopes of the mountains.
Part near the tourism office, then walk about 3 hours at a good pace, it leaves behind the high forest and begins to move between ñires dragged down to the foothills of Black Mountain, the soil becomes more desert and the last ascent, we finally left in the towers of the hill and then cross to the Hill Monk confronts.

On a clear day the view is outstanding recall that are nearly 2000 meters above sea level. From there you get to see volcanoes Lanin, Osorno, Tronador.
Prior to this output must notify the park ranger or register with the tourist office for safety. The level of demand for this tour requires fitness.

Laguna the twins and Cave Painting

On this tour you have to cross Lake Traful to the largest peninsula from there in direction NO part considerable upward sloping path through a forest of cypresses and radales. After about 2500 m you will come to a pass which allows positioned to observe, West Lake Traful and to the NW the descent to the Laguna Blanca about 800 m.Rodeando partly Laguna Blanca will continue the climb up a small rock from which it is displayed at this Laguna Verde.

As you descend you will cross a pampa that exposes the glacial action in the form of alluvial fan. Bordering the north of the green lagoon, striking the tone of their waters, and about 1200 m. and after crossing the Arroyo Verde you will come to a rocky overhang where a large concentration of rock paintings. To return, you retomarás the path until you reach the fork to the left that descends and forms a circle to arrive at the bay again.
Importantly, this attraction is located within a protected area therefore need to let your intentions ranger before departure.

An unforgettable trip to the steppe in the transition young cypresses colonizing the territory. Eastward route approaches the Rio Traful descending bravo to the Limay. Arriving at Cuyin Manzano opens the way to the right and entered the canyon. Rocky walls of great height, with straight lines and spiral steps give access road to the small rural area upstream of Cuyin Manzano, Rio coasts during the summer become a stage conducive to picnic and enjoy the waters and beaches . Also during certain times of the year it is possible to see a condor, whose shelters are in the rocks of heights. Returning to Route 65, and toward Confluence Traful, the ancient rock formations make the landscape, the wind and rain over thousands of years have “molded” rocks more attractive. There are several caves, the most important and studied is the Traful, that after the last ice age served as a refuge to the primitive man who lived by hunting.
Already in Confluence Traful and on the opposite coast of Rio Limay, the landscape is dominated by the Enchanted Valley, a corner to dream and let your imagination contemplating the figures formed by rocks, sculptures whose author to nature, who preferred visitors awarded them the names. Thus they were born masterpieces as God’s Finger, Sentry, Express Train, the Siamese, among others.