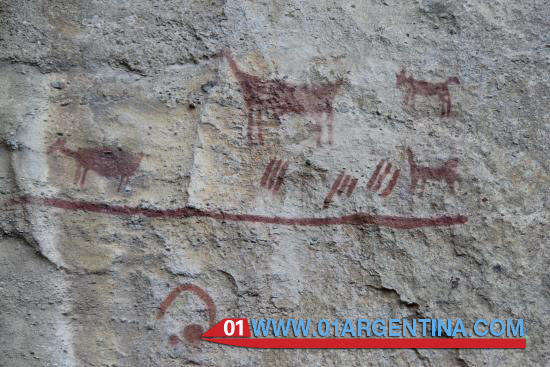 Walichu Caves, a must place near the Calafate
This archaeological site, 8km away from Calafate has a very original geological structure of sedimentary rock and steppe vegetation. They can be seen there by taking tour from Calafate to the caves and natural caves used by prehistoric man, for the execution of his pictorial demonstrations performed by pre- tehuelches peoples, men from the Upper Paleolithic period.
The original paintings were discovered by Francisco Perito Moreno in 1877 and would have an approximate age of 4000 years. Along with these you can see, on the cliffs, reproductions of examples of rock art elsewhere in the Province of Santa Cruz.
On the tour you can see the materials used Paleolithic men such as were iron oxides with guanaco grease, plants resin, gypsum, egg whites and even human saliva. Among the colors used are red, ocher, yellow, black and white. Among the techniques that this entrainment fingers were used, digital painting using fingers or specks of hair and mouth blown out through the hollow guanaco bone.
The cave environment is ideal because it is located on the shores of Lago Argentino and pictorial engravings were walking through paths of interpretation. One path is called Reproductions where details, shapes, colors, and the original layout of the grounds are maintained. While the interpretive trail is an archaeological zone expression of those men who left testimonies of their presence in this place some 4000 years ago.

Although the cave is known for Western travelers since the nineteenth century (the first being the expert limits Francisco Moreno), archaeological investigations began in the 1960s These showed that the ancient inhabitants lived by hunting and gathering wild plants. In addition to finding the ‘painted hands’ are also shapes such as circles, ovals, stellate figures, among many others.
The hands were not painted on the rock but stenciled on the stone. This means that those ancient inhabitants supported the palms on the roof or wall of the cave and then covered with paint.

The main cave is carved by erosion in the high walls that accompany high river valley paintings in the northwestern province of Santa Cruz, and south of the town of Perito Moreno. The cave has several eaves, and in its interior paintings made over an extended period from 9300 to 1300 AP AP. They are the first artistic known of South American peoples.
In such paintings that reproduce figures related to everyday life tehuelches Indians and their predecessors, former hunter-gatherers elements are observed. Of these the most famous and oldest are the silhouettes in positive and negative hands (are counted 829), in some cases overlapping. Such shapes were performed by airbrush old methods (the color material is applied as a spray blown through the hollow core of small bones of animals).
Also, you can see silhouettes of animals (mainly guanacos and rheas) major components of the diet of ancient peoples, is often scenes of collective hunting of these animals are shown.
As for the representation of the human figure, it is also lesser frequency and linear forms.
Are more common geometric patterns (mainly spirals) that would symbolically representing the unknown deities today.
The range of colors is the dominant involving the red, ocher, yellow, white and black. They are confeccionaba with fruits, plants and crushed rocks. Also-contagious magic (as rated by Fraser) – Blood of the hunted animal fat thereof was used as a binder.
Topics respond to three different periods; the oldest less abstractly-and is rich in hunting scenes; in interim stick hands are accompanied secondarily by the representation of individual animals; in the last period the overriding theme is that of geometric patterns, lines, points and mandalas of which its meaning is unknown.
These artworks were exposed to Western culture in 1876 by the Argentine explorer Francisco Moreno.

The meaning of such representations is presently hypothetical, although almost certainly be part of a ritual with high magical component, there are impressions positive hands (ie, achieved by supporting the walls of the palms stained with paint).
Risk of destruction
At present, due to irresponsible tourism and the lack of a legal framework, most caves in the country are in danger. La Cueva de las Manos is one of them. The natural environment of a cave whose main characteristics darkness, temperature, and humidity levels stable. That environment which houses wildlife, lakes, underground galleries, ancient mineral deposits, archaeological and precious guardada- land is threatened by over visiting tourists. According to statements of Vice FADE (Argentina Federation of Speleology), ‘without a prior study and a management plan in a cave, human presence steadily causes alterations in the middle with an impact, sometimes irreversible. Along with this he said that the objective of sustainable development is that the use of resources is sustainable over time and that future generations have the same benefit of visiting the same cave ”
La Cueva de las Manos, a World Heritage Site by UNESCO in 1999, has been painted, deeds and broken walls. According to the president of the FADE ‘caves contain unique information for the reconstruction of paleoclimate: from the study of stalactites and stalagmites can be reconstructed surface climates 50,000 years ago. That espeleotema wins breaks and hugs by tourists to take a picture or take souvenirs. Surely not know the damage they do, as a stalactite takes more than a thousand years to grow only 1 centimeter