Classical music for the wine taste in mendoza 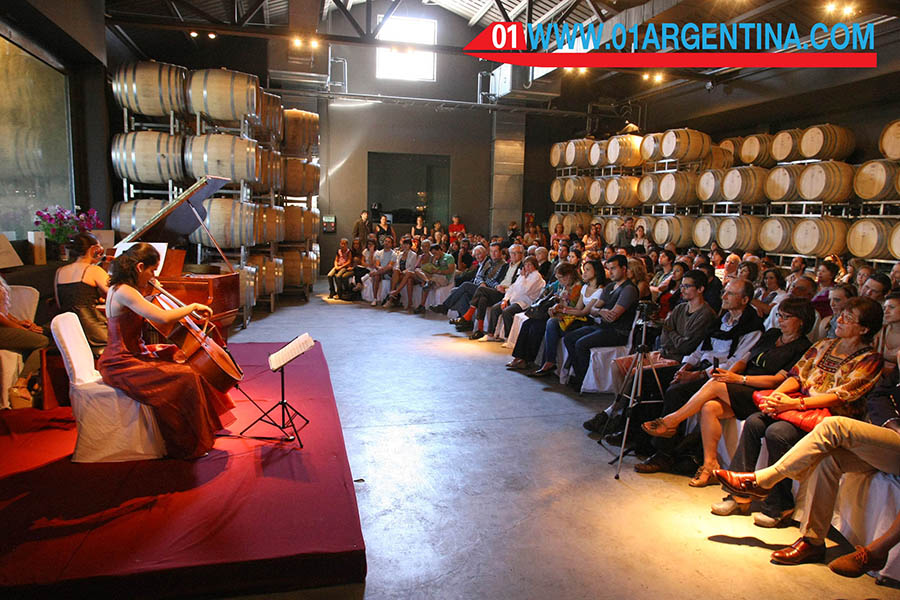 The launch was held this morning at the Independence Hall Theatre and attended the baroque group Violetta Club. The Gala Opening will be on Saturday 28 at Uspallata
From March 28 to April 5, you can enjoy concerts of classical music cycle by the Wine Routes to be developed in different scenarios Mendoza. This year, the program will pay homage to Johann Sebastian Bach, in the 330 anniversary of his birth (1685-1750).
During the presentation of the XV Festival, held this morning in the hall of Independence Theatre, the chief of staff of the Ministry of Culture, Leonardo Martí said: “It is an honor to be again presenting the Festival Classical Music by Wine roads, for all that this implies, as it allows us to bring classical music to locations that do not normally have access. ” The official noted that over the years, the Festival program has been nourished and “far from what it had in its first edition 15 years ago”.
As in previous editions, Classical Music by the Wine Roads maintains its solidarity. Two tickets will be delivered in a box of powdered milk to be allocated to civil organization Food Bank. The exchange of tickets will be held at the Ministry of Culture, Spain and Gutierrez Street, City, from Wednesday 25 March from 9.00 to 13.00 and 15.00 to 18.00. On Sundays and holidays the exchange will take place from 10.00 to 13.00. The audience also can take advantage and try to enjot the tourist attractions of Mendoza city by booking a tour with one of the most important local travel travel agencies of Argentina and South America.

The tourist value of the traditional cycle of Easter

With the artistic direction of pianist Dora De Marinis, who heads since 2010, the 2015 Festival features 55 concerts that can be enjoyed to the length and breadth of Mendoza. This year, the opening of the festival will be held in the town of Uspallata, the gateway to the mountains of the province.
Artistic director of the festival, Dora De Marinis, said: “For me it is proud to be once again part of this festival, which each year is becoming one of the most important cultural events in the region. Both Mendoza and tourists can enjoy local and international “professional musicians.
The program will feature local artists, country and the world who will show their talent among the vineyards, wineries and mountains.
Worth noting that this edition of the International Festival “Classical Music for the Wine Roads” coincides with the 15th birthday of the traditional Festival, which already has 15 editions uninterrupted since its opening, coinciding with the beginning of the new century (2000) .

The musical encounter largest country autumn will be dedicated to commemorate the birth of German composer Johann Sebastian Bach, musical intangible heritage of all mankind. They will also have their recognition performers who have participated more regularly in these 15 years the Festival and wineries that have accompanied almost every successive editions of the Festival.
The Opening Gala, which will be on Saturday 28, at 11, in the Tourist Parador de Uspallata, will feature the Children and Youth Band Uspallata, created and directed by Antonio Pereyra, acting with the Camerata Vocal de Mendoza by Fernando Ballesteros.
The remaining concerts that can be heard Bach are:
• March 29: Bach Academy, conducted by Maestro Mario Videla, with outstanding soloists as soprano Soledad de la Rosa, trumpeter Fernando Ciancio and violinist Oleg Pishenin in Independence Theatre (21)
• March 30: Fernando Ciancio and Enrique Rimoldi, trumpet and organ, Shrine of Mary Help of Rodeo del Medio (at 20:30)
• March 31: Gala Argentine Pianists in Independence Theatre (English Suite; Toccata and Aria Variata Italian style)
• April 2: Bach Cantatas and Motets in the Cerro de la Gloria (at 17)
• April 4: Fernando Gentile, Suites for violoncello, Bodega Don Bosco (at 12)
• April 4: Easter Oratorio, Bodega O. Fournier (at 12)
• April 5: Organ concert by Jiri Lecian (Roma), Basilica San Francisco (at 12)
• April 5: Bach Concertos for piano four hands; The Well Tempered Clavier, Vol 1 Complete (24 preludes and fugues), at the Municipal Theater Julio Quintanilla at 19 pm.