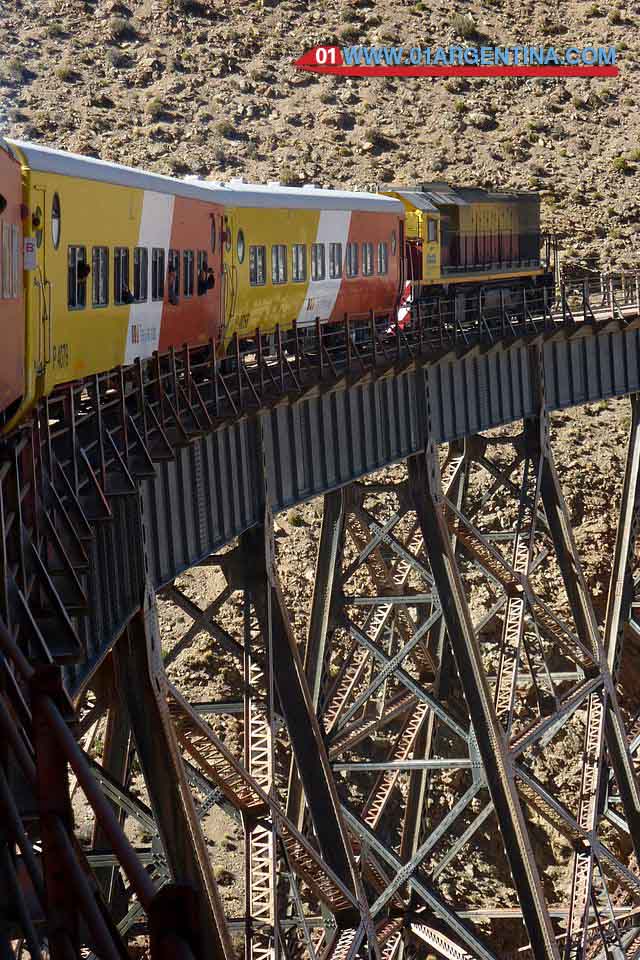 The famous Tren de las nubes is one of the most important attractions of Salta is out of service after derailment occurred on Saturday 19 July, in the hamlet La Bomba, at kilometer 107 of the National Route 51, which linking the capital Salta San Antonio de los Cobres, where they were rescued 350 passengers unharmed by members of the National Gendarmerie, at 3890 meters above the sea.
Not yet have details on 2015 rates for the train to the clouds, but above this the Chairman of the Board of “Tren de las nubes” Society of the State, reported that “being defined fares for passengers, and there will be a Special rate for Salta “. Asimismo indicated that tourists will have a cheaper rate than was taking before.
El Tren a las Nubes (or Train to the Clouds) is an Argentine tourist rail service on the railroad spur C14 General Manuel Belgrano1 in the section linking the station to the viaduct Skip Polvorilla on the Andes, more 4220 m (13,845 ft). The train leaves from Salta, crosses the Lerma Valley to enter the Quebrada del Toro and reach the Puna de Atacama.

Origin of the name

The name “Train to the Clouds” is born from a film made by two students from the National University of Tucumán during the first years of the 60s, which made the stretch Salta-Socompa aboard the passenger train, which at that time ran pulled by machines vapor.
The train as ferroturístico born venture initiated by the authorities of the Ferrocarril General Belgrano, who in November 1971, resolved to run an experimental train officials and journalists.
On July 16, 1972 the first official tourist trip, remaining until 1990 in the hands of the State Railways and, since 1991, into the hands of private capital Salta is performed.
The influx of passengers was the small beginning as agencies Skip preferred to sell to tourists their own programs. Only when in 1978 Argentine journalist Federico B. Kirbus published in the journal autoclub Automobile Club Argentino a note entitled “A Cloud in a Train” began the public interest in this new tourist attraction.

The train has a capacity for 468 passengers and has a top speed of 35 km / h at a distance of 434 miles (round trip).
Richard Maury took over the project, taking into account the principle of adhesion of train wheels to the tracks, discarding the rack system commonly used so that the train may safely reach the heights. No cogwheels, not even for the steepest part of the climb because the tracks are arranged in a special way running through a system of zigzags and spirals.
For emergency situations the train takes on every trip, plus the locomotive pulling training, additional.

Viaduct The Polvorilla.
The train station of the city of Salta to the viaduct La Polvorilla every day of the year except 90 days of the austral summer; during this rainy season are common desmoramientos that often hinder the railways.
The height of the tracks reach the 4220 meters (13,845 feet), making it one of the highest trains in the world.
The journey takes about 16 hours. Crosses 29 bridges, 21 tunnels, 13 viaducts, 2 “rollers” and 2 “zigzags”.
One in San Antonio station the Coppers, and the other on the viaduct The Polvorilla: Throughout the tour just two stops are made.
The train services include dining car, medical office, audio, video and bilingual guides, private security and ambulance accompanying the train.