Travel Information about the Patagonia region

At the southern tip of the American continent, between the imposing and beautiful Andes Mountains and the majestic Atlantic Ocean is the extensive world’s southernmost region called PATAGONIA. Land of mystery, myths, intrepid traveler, the Southern Cross, the constellation Southern Patagonian illuminating the night, which once guided to intrepid travelers: Magallanes, Fitz Roy, Hudson, Darwin ….
Patagonia has attracted adventurers with exotic dreams over time. The vastness of its territory and the variety of its landscapes get that every visit will be a surprise for the traveler.

The scientist Charles Darwin knew transmit the sensations aroused in the visitor Patagonia, after sailing nearly five years in the “Beagle”, which had the same fascination, live today many tourists eager to know this man’s final frontier, where the high peaks, lush forests, coastal cliffs, placid lakes and majestic glaciers compete in beauty in this territory that covers a third of Argentina. 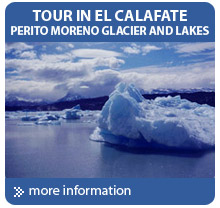 Ancient and silent forests, hardwoods and other native species Araucaria extend the shores of serene lakes. In the tops of towering mountains of the Southern Hemisphere, nature overflows with granite peaks and glaciers. Between the mountains and the sea, with its rich variety of wildlife, extends the arid Patagonian plateau, final resting place of dinosaurs, showing the deep traces of the past.
The ancient history carved in stone, in the Petrified Forest in the provinces of Chubut and Santa Cruz with Araucaria fossils between 65 and 130 million years.
The Cave of the Hands of the High River Paintings, Cultural Heritage of Humanity, in the province of Santa Cruz, one of the manifestations of most significant rock art of Patagonia, vestiges of a culture of 9,300 years.

To the west, at the foot of the towering mountains and volcanoes, there are the main South American ski centers, with an excellent choice of hotel and gastronomic infrastructure. The Cerro Catedral in Bariloche, Chapelco, Cerro Bayo, Caviahue, La Hoya, Cerro Castor and others, offering downhill skiing, snowboarding, snow polo, sledges and many more opportunities to enjoy the snow in Patagonia.
Thirteen glaciers, spilling huge tongues of ice on the waters of lakes Viedma and Argentino, Glacier National Park, Natural Heritage of Humanity, shelters the Perito Moreno, Mayo, Spegazzini and Upsala, lake sailings allow a closer its stunning natural panorama. 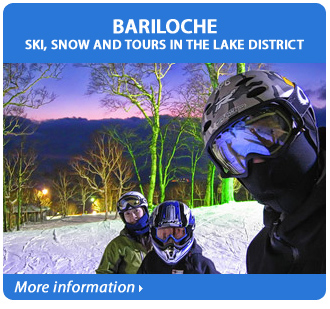 is the meeting place of the southern right whale, where, to complete their breeding cycle goes from May to October, on a date every year inevitable.
Thousands of species of seabirds live on the reservation Bird Island, where they complete part of their life cycle. Colonies of sea lions and elephant seals frolic in islets and shoals.
Maras, rheas and guanacos run by steppes and Punta Tombo is the largest colony of Magellanic penguins in the world. To the south, Tierra del Fuego and the world’s southernmost city, Ushuaia, a gateway to the vast and mysterious Antarctica.

It is to the astonishment the white continent, Antarctica, a postcard of ice at the South Pole.
Rivers, lakes and ponds are the medium where Patagonian trout and salmon reach their largest sizes. There are also native species: perch, puyén big catfish Patagonian silverside and streams, which can only be fished in preserved areas.